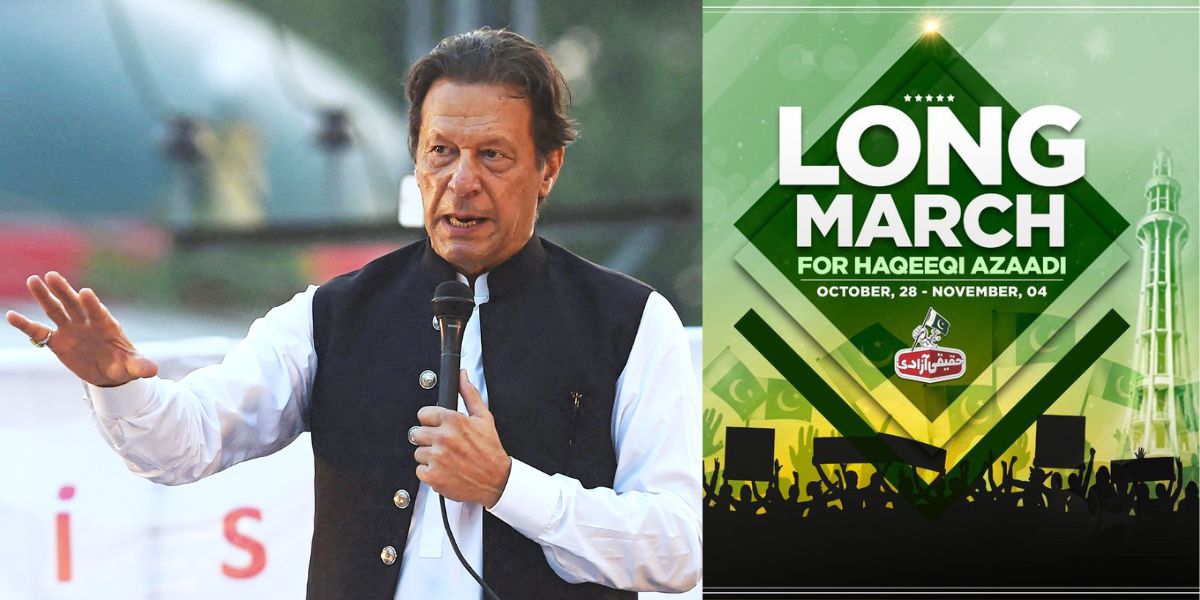 The leader of the Pakistan Tehreek-e-Insaf (PTI) is marching toward Islamabad in order to force the incumbent government to announce a date for early elections.

Former Prime Minister and PTI Chairman Imran Khan addressed the participants before departing for Islamabad, saying that the time has come to begin the journey for haqiqi azadi (real freedom).

According to the former premier, the march’s goal is not personal or political, but rather to free the country from slavery.

He stated that decisions concerning Pakistan should be made in Pakistan, not in Washington. No one should order Pakistan to join other countries’ wars.

The people of the country are experiencing the highest inflation because thieves rule the country. According to Imran Khan, the demand for fair and transparent elections in the country is not unconditional.

Many people have already gathered at Lahore’s famous chowk to take part in the long march against the incumbent government.

The Islamabad Administration rejected Pakistan Tehreek Insaf’s no-objection certificate to hold its gathering in the federal capital on Friday.

In a letter, the district administration asked PTI to satisfy the administration in writing, adding that the party had violated the NOC issued to it on May 25.

The Pakistan Tehreek-e-Insaf (PTI) has finalised the schedule for Imran Khan’s long march.

The Interior Ministry has reiterated that no political party will be allowed to destabilize the state “through forceful measures” ahead of the Pakistan Tehreek-e-(PTI) Insaf’s long march towards Islamabad.

According to details, the interior ministry wrote a letter to all provincial governments, as well as the governments of Azad Jammu and Kashmir (AJK) and Gilgit-Baltistan (GB).

“It is critical that the federal and provincial governments work together and adhere to constitutional provisions in order to maintain law and order in the country,” the ministry stated in the notification.

“The importance of adhering to the Constitution and laws of the land by all relevant governments, including federal/provincial/special area governments, cannot be overstated because it is an obligation for all governments under the country’s constitutional and legal framework,” the letter stated.

PTI leader Hammad Azhar shared that he was already making his way to the meeting point.

Leaving for liberty chowk from my constituency. pic.twitter.com/FSxMJV7PAF

Supporters could be seen riding along his car on their motorcycles carrying party flags.

Meanwhile, Yasmeen Rashid was also seen rallying support ahead of the march.

She was also reportedly making her way to Liberty.

Earlier, Fawad Chaudhry had urged Lahore’s citizens to come out onto the streets and join the march, saying “if you do not come out today, then you should not have any complaints about this system”.
“If you want to change this system, come out of your homes. Your childrens’ lives will otherwise also be spent in this rotten system,” he warned.

Meanwhile, political tension is growing in the country as Islamabad was put on high alert after former prime minister Imran Khan had on Tuesday announced to hold the long march, demanding the government call fresh general elections.

The government has also started preparations to deploy thousands of security personnel to block Imran’s supporters from entering the capital.

According to officials, the interior ministry has already decided to deploy around 30,000 police, rangers, and para-military troops in Islamabad and not allow protesters to enter the red-zone area near the parliament building.

With forces about to roll into Islamabad and the government on an anxious vigil, the scenario had cast the nation’s capital back to a familiar state of affairs witnessed on the eve of PTI’s May 25 long march that saw intense showdown and crackdown.

According to a notice issued by the interior ministry on Wednesday, the Islamabad police have completed their preparation for the long march.

Moreover, 4,265 Frontier Corps officers, 3,600 Rangers personnel and 1,022 policemen from the Sindh police will be on duty during the march.

The authorities had also sent hundreds of containers into Islamabad to barricade all entry points before the arrival of demonstrators.

All police officers and personnel have been instructed to remain unarmed.

Furthermore, on the direction of the interior ministry, the Pakistan Railways (PR) prepared a list of 400 railway police personnel to thwart the long march.