Yuzvendra Chahal, a cricketer, and Dhanashree Verma married in December 2020. Dhanashree recently erased her surname on Instagram, while Yuzvendra uploaded a mysterious image.

Fake News: On Thursday, a fake ANI account said that cricketer Yuzvendra Chahal and YouTuber Dhanashree Verma file for divorce in Punjab Court. However, ANI’s official social media handle clarified the report’s veracity, saying, “Please keep in mind that all three accounts are impersonating ANI. No such information has been released.”

Please note: All three are fake accounts impersonating ANI. No such news has been flashed. pic.twitter.com/rIRwhzneit

The allegations about their divorce that have been spreading on social media sites are completely false. Yuzvendra responded to these accusations on Instagram Stories, urging his supporters not to accept the rumours. 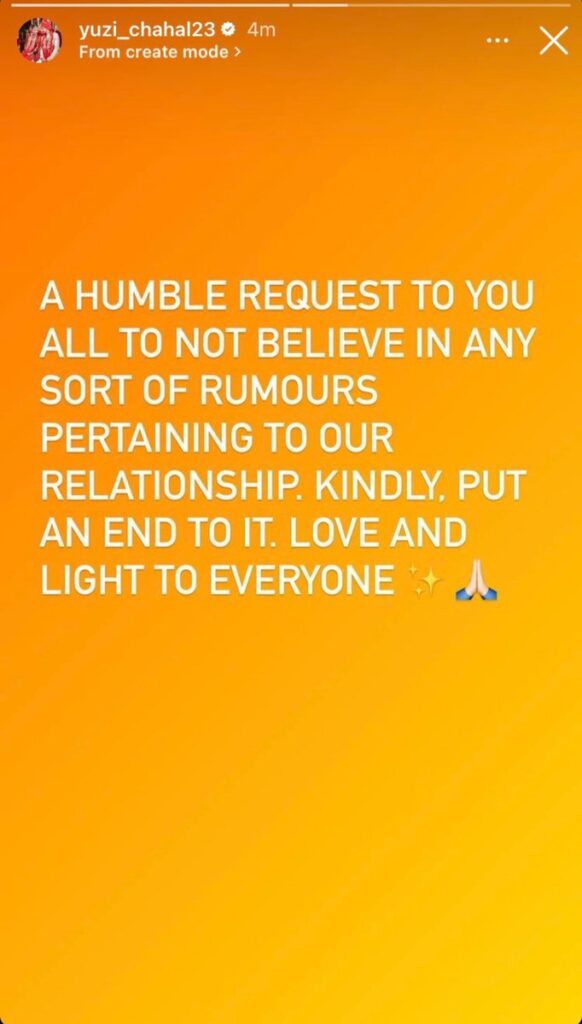 The couple will marry in a lavish ceremony in December 2020. The couple’s divorce rumours began after Dhanashree removed her last name from her Instagram account, followed by a mysterious remark by Yuzvendra Chahal. The YouTuber has removed the word ‘Chahal’ from her Instagram handle. On August 16, shortly after her action, Yuzvendra took to Twitter and posted a mysterious message that read, “New Life Loading…” The pair had dated for a while before getting married. They allegedly met on Instagram. Dhanashree travelled to the UAE with Chahal as part of the Royal Challengers Bangalore (RCB) squad. They were also seen together in Australia, where Chahal was a member of the limited-overs squad.

Chahal had taken everyone by surprise when he announced his engagement to Dhanashree. He had posted images of the event on social media. Dhanashree is a doctor and YouTuber in addition to being a choreographer.

The couple enjoyed a beautiful wedding in Gurugram. Yuzvendra had wrote on Instagram, “We started at “Once upon a time” and found “Our happily ever after,” cos’ finally, #DhanaSaidYuz for infinity & beyond!”