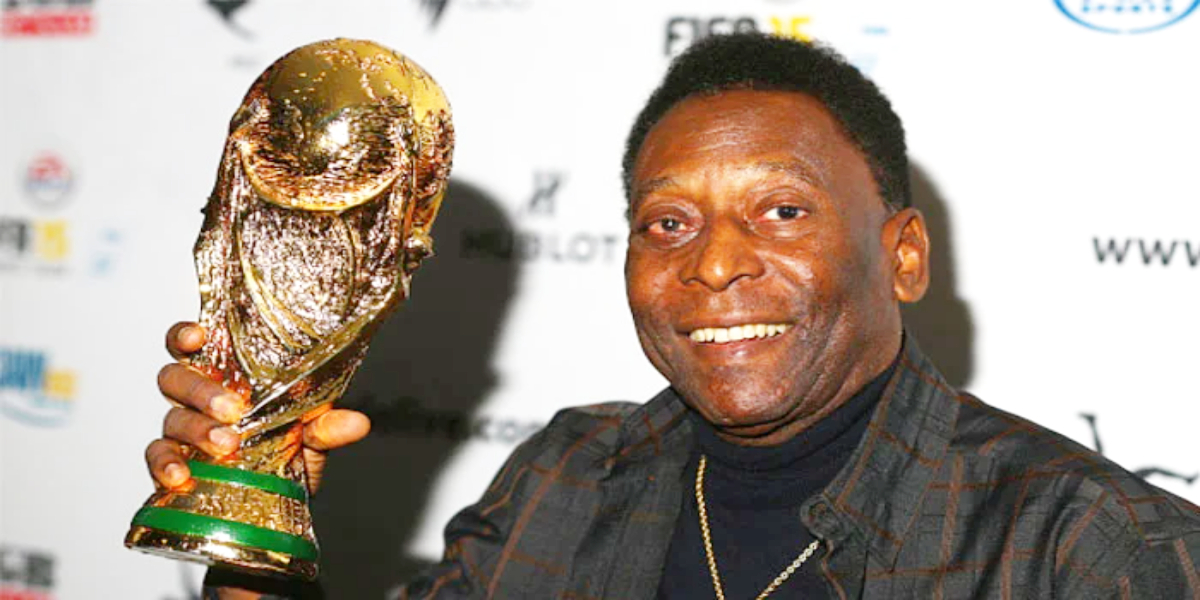 The Legendary footballer Pele from Brazil who rose from barefoot squalor to become one of the finest and most well-known athletes in contemporary history, passed away at the age of 82.

In Rio de Janeiro: Pele, the legendary Brazilian soccer player who climbed from barefoot squalor to become one of the greatest and most well-known athletes in modern history, passed away on Thursday at the age of 82, according to his daughter’s post on Instagram.

Following the discovery of a tumour in his colon, he has recently been in and out of the hospital.

The only player to ever win the World Cup three times is Pele, real name Edson Arantes do Nascimento, who set a record by scoring 1,281 goals.

He played soccer for seven decades and served as its ambassador, charming popes, presidents, and Hollywood celebrities with his amazing abilities and endearing grin.

The origin of his well-known moniker is one of many parts of his youth that have been hidden by myth. According to Pele (sometimes), he frequently served as the goalkeeper in neighbourhood sports. Kids started to compare him to a nearby player named “Bile,” and the letters gradually became distorted over time.

Whatever the case may be, he quickly impressed scouts, not as a goalie but rather as an attacking forward, a prototype for number 10.

He was revered for his diverse skill set and more than any player before or since he was able to do it all. He was two-footed, had incredible speed and stamina, and could head, pass, tackle, and of course, score goals.

By the time he joined Santos at the age of 15, the little coastal club had become one of the most recognisable names in the sport.

He won every Brazilian football award during his illustrious 18-year tenure at the club, as well as two Copa Libertadores the South American version of the Champions League and two Intercontinental Cups, an annual competition involving the top clubs in Europe and South America.

Though a team psychologist referred to the 17-year-old as “clearly infantile” and urged against playing him, the national team quickly recognised his skill and chose him for the Brazil squad travelling to the 1958 World Cup in Sweden.

Later, Pele helped Brazil win its first-ever title by scoring a hat-trick in the first half of the semifinal match against France and two more goals in the match against the host Swedish side.

He missed all but two of Brazil’s 1962 Cup games due to injuries. With a Brazilian team that had other talents like Carlos Alberto Torres and Tosto and is widely regarded as the finest team ever, Pele won the title for the third time during the 1970 tournament in Mexico at the age of 29, when he was fully mature.

Read More: Ronaldo will play in the Manchester United against Rayo Vallecano friendly.

The Italian defender Tarcisio Burgnich, who was tasked with marking Pele in the 1970 final, remarked, “I reminded myself before the game, ‘He’s made of skin and bones just like everyone else.'” But I was in error.

Pele resigned initially in 1974, but when he discovered that foolish investments had left him destitute, he accepted an offer the following year to play in the newly formed North American Soccer League for the then-astonishing sum of roughly $1 million a year.

Even jaded New Yorkers were captivated by Pele’s magnetism. He had friends with famous people and once dined at the same table as Mick Jagger, Rod Stewart, and Andy Warhol at the famed Studio 54 nightclub. Andy Warhol referred to Pele as the exception to his aphorism that everyone will have their 15 minutes of fame.

The artist claimed that Pele was one of the few people who disagreed with his theory, stating that rather than 15 minutes of fame, he would have 15 centuries.

Pele claimed that he needed to protect his body and act as a role model for children, even in the presence of such company, by abstaining from drink and narcotics.

However, he acknowledged having other “weaknesses.” His two divorces, several affairs, and the two children he admitted to having fathered outside of marriage fueled perceptions of a gulf between the hunky-dory corporate pitchman and the elusive real-life individual who chose to go by the name Edson.

Pele’s success on the field helped the New York Cosmos win the league title in 1977 and brought millions of new followers to a sport that had previously looked distant and European.

The chairman of the US soccer federation referred to Pele as the “most crucial” factor when the US secured the right to host the 1994 World Cup years later.

According to FIFA’s official statistics, Pele scored an astonishing 0.94 goals per game throughout the course of 1,281 games. With 757 goals in 812 games, he was just as prolific in official tournaments as he was in friendlies or games he played as part of his military service.

A number of health problems have recently plagued Pele, including hip surgery that left him with ongoing discomfort and difficulty walking unassisted. Although he made fewer public appearances, he continued to be active on social media.

Six known offspring remain as Pele’s descendants. In 2006, a seventh person, whose identity he had long since forgotten, passed away from cancer.