SWAT: PTI’s Fazl Mula and ANP’s Hussain Ahmed have emerged as the two leading candidates after the vote count began once the polling ended for the Khyber Pakhtunkhwa Assembly seat PK-7 Swat.

Unofficial results from 82 polling stations out of 124 showed Mula leading the count with 9,647 votes while Ahmed is behind with 8,716 votes. 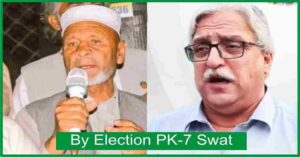 ANP’s Ahmed is supported by PPP, PML-N, QWP, JUI-F and others.

As per the Constitution, the Election Commission of Pakistan (ECP) is required to hold a by-election on any lawmaker’s seat within 60 days from it having fallen vacant.

A day earlier, the ECP — in a statement — had said that it expected a tough contest between the four candidates out of which the PTI and ANP candidates were expected to be neck and neck.

The ECP had set up a total of 124 polling stations in the constituency with 308 booths.