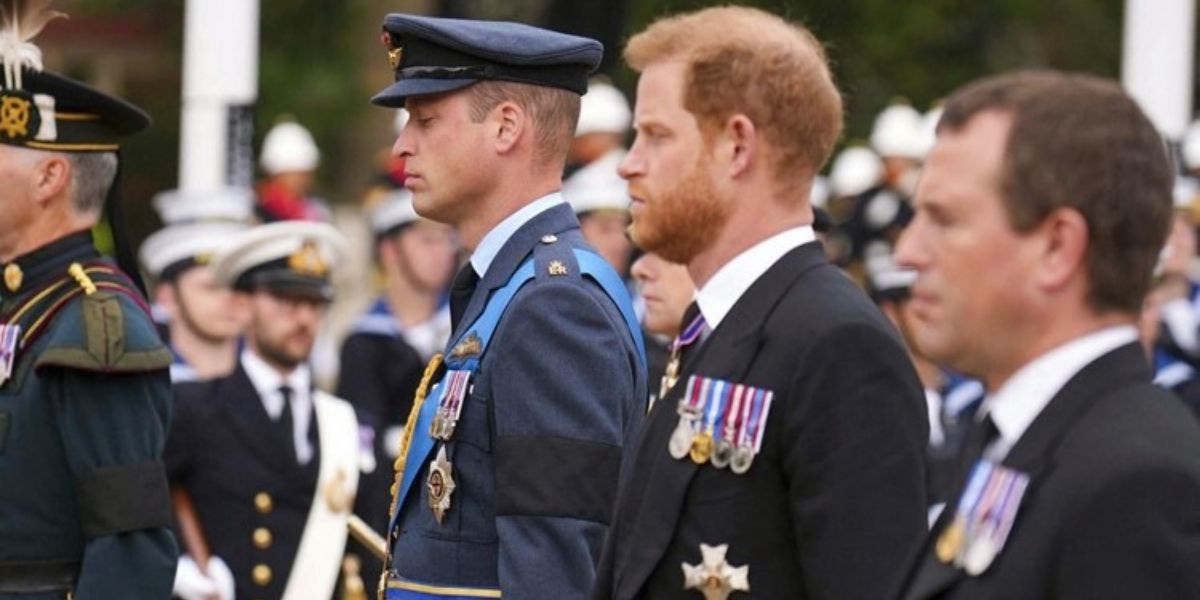 London: The “fab four,” made up of Princes William and Harry and their wives Catherine and Meghan, marched behind Queen Elizabeth II’s coffin on Monday, much as the royal brothers did for their mother Princess Diana 25 years ago.

The two spouses appeared to be as estranged as ever, though, as a result of Harry’s projected tell-all memoir and rumours of backstage arguments over the names and military uniforms for his and Meghan’s children.

As their grandmother’s coffin was brought to Westminster Abbey, the brothers carried out their duty by following their father, King Charles III, and other notable members of the royal family.

William was wearing a uniform. Harry wore a morning suit with his medals attached, which is something he is not permitted to do since quitting his position as a working royal.

As the coffin was carried into the abbey, Harry stood with his eyes down and saluted alongside other family members who were dressed in uniform.

William revealed to mourners last week that he was reminded of his mother’s funeral procession when he was 15 when he followed his grandmother’s casket on its way to be placed in the state on Wednesday.

But there was no hint that they were thinking about that awful shared experience.

The spouses of the siblings, along with William and Catherine’s two oldest children, Prince George, age nine, and Princess Charlotte, age seven, joined them at the entrance of the abbey. The siblings and their wives used to be so close that they could finish each other’s sentences.

The four did not look at each other as they marched up the aisle behind the coffin and sat separately. Until their feud, they were thought of as the monarchy’s future.

With his father and siblings Anne, Andrew, and Edward, William was seated in the front row with his family.

In the second row, next to his cousin Princess Beatrice, the Duke and Duchess of Sussex were seated.

There were rumours Harry would be permitted to attend the funeral while wearing his uniform after making an appearance dressed in the Blues and Royals cavalry unit outfit on Saturday night at a vigil by the queen’s casket.

The king’s most recent gesture toward him and Meghan seemed to be that.

Harry served with the British army for two tours in Afghanistan, but working royals are expected to dress in uniform on these occasions due to strict decorum.

Harry has since renounced his royal responsibilities in order to move to North America in 2020, which has put him in a difficult position.

During an appearance on Oprah Winfrey’s talk show, Meghan accused a royal family member of racism.

Additionally, she said Kate made her cry and that the royal family ignored her suicidal ideas.

From the time when they were known as the “fab four” by the British press, the two couples’ chilly relationships are a far cry.

Two days following the queen’s passing, the two couples unexpectedly went on a walkabout in front of Windsor Castle, giving the nation hope that the bitter conflict might come to an end.