ISLAMABAD: PM Shahbaz Sharif on Friday said that the government has decided to impose a 10% super tax on large-scale manufacturers including oil, Fertilizer, Steel , Sugar, Automobile and Textile

The PM made the announcement after chairing a meeting of his economic team during which important decisions were taken related to budget 2022-23.

Those earning Rs300 million will pay four percent on their annual income, he said and added that poor segments had played their role to address economic woes and now it is the turn of those privileged to play their part.

The prime minister hoped that with hard work and faith in Allah Almighty, things would ease up.

He expressed confidence that the measures would take Pakistan forward on the path of prosperity, progress and economic stability. 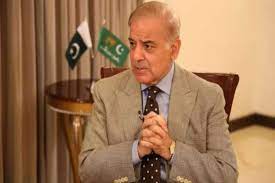 He mentioned the support of the leaders of allied parties in standing shoulder to shoulder with the government.

He said merit, honesty, integrity and upholding the right of the downtrodden were the hallmark of his government.

Shahbaz Sharif talking is great but the real thing is government made Pakistan economy down they thinks economy is rising but in actual economy suffering.
The Government should take emergency action to avoid Pakistan Bankrupt.