Pakistan’s first electric car has a 35kWh battery that can travel 210km with the air conditioner off and a peak power of 80kW (108 hp).

On Sunday, the NUR-E 75, Pakistan’s first electric Car prototype, was unveiled. The battery would have a 35kWh capacity. The vehicle would have enough power to travel 210 kilometres after being charged. 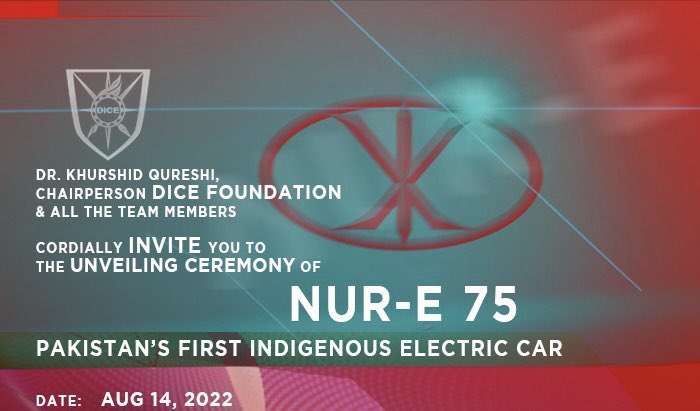 The prototype’s designer and developer, Dr. Khurshid Qureshi, claims that the vehicle would save a significant amount of fuel, aid in the fight against global warming, and maintain economic prosperity.

He is also the founder and chairman of the Distinguished Innovation, Collaboration & Entrepreneurship (DICE) Foundation.

A non-profit organisation with a US base called DICE Foundation is run by Pakistanis living abroad in the US, the EU, and other countries, with assistance from regional businesses and academic institutions.

Dr. Qureshi, a recognised authority on creating autonomous vehicles, claimed that the production of the car has three stages: the first involved industrial design, production, and launch; the second involved expanding production to include sedan and SUV, small commercial trucks, and export of EV platforms; and the third involved exporting the cars.

The fully functional prototype, the EV NUR-E 75, is ready for testing and regulatory approval, he said, adding that production started in 2019. Meanwhile, design work is being done on a rolling platform that will be used for various vehicle segments. As he described the five-seater hatchback’s various features, he noted that it has a maximum power of 80 kW (108 hp), a battery capacity of 35 kWh, and a range of 210 km with the air conditioner off.

According to him, the fully electric vehicle has a top speed of 120 km/h, 16-inch tyres, a 190mm ground clearance, and a 220V charging capacity that takes eight hours, with fast charging also an option.

He emphasised that the car, given to Pakistan as a gift for its diamond jubilee, would play a significant role in the context of the environment and climate change and help us move away from the consumption of non-renewable fuel.

“Once it hits the market in the last quarter of 2024, this innovation will be a game changer both for Pakistan’s economy and for the well-being of the country’s average citizens, and I can’t stress that enough,” the author says.

For the past 15 years, the DICE Foundation has worked in Pakistan to support innovation, develop capability, and turn brain drain into brain gain.The organisation, which was founded in 2007, focuses on the automotive, health, agricultural, energy, creative arts, and textile industries.

DICE is a strategic initiative of the DICE Foundation, USA, with the goal of promoting an entrepreneurial and innovative culture throughout the nation. It is an umbrella programme that currently houses a number of significant platforms.

The main goal of each of these platforms is to ignite the innovation cycle that the nation needs for progress, prosperity, and sustainable development.