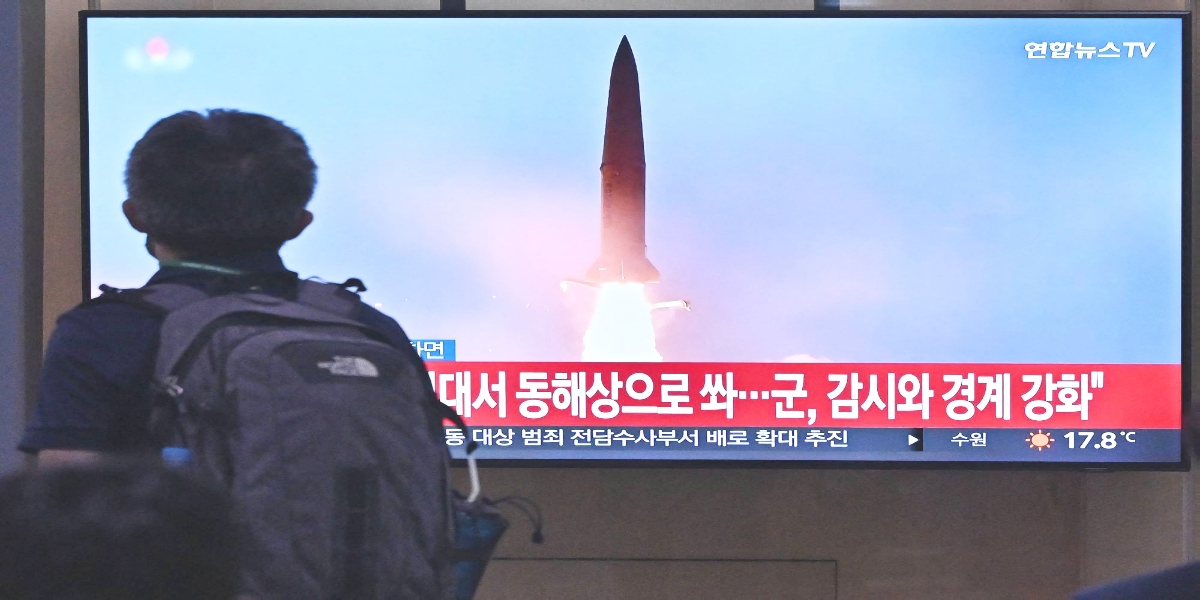 (Infosette News ) Seoul: North Korea launched two ballistic missiles early on Sunday, according to Seoul’s military, making it the country’s seventh such launch in the past two weeks. This launch came only hours after joint exercises between American aircraft carriers with nuclear propulsion and South Korean forces came to an end near the Korean Peninsula.

In recent weeks, coordinated naval exercises between Seoul, Tokyo, and Washington have increased, angering Pyongyang, which views them as invasion drills.

The recent escalation of joint naval exercises by Seoul, Tokyo, and Washington has angered Pyongyang, which interprets them as invasion drills and defends its barrage of missile launches as essential “countermeasures.”

With negotiations long deadlocked, Pyongyang stepped up its development of prohibited weapons, flying an intermediate-range ballistic missile over Japan last week, prompting authorities and analysts to warn that it had finished its preparations for yet another nuclear test.

The East Sea, commonly known as the Sea of Japan, is the body of water in which the Munchon area in Kangwon province is located.

On Sunday, the South Korean military reported that it had “detected two short-range ballistic missiles between 0148 and 0158 (1648-1658 GMT) fired from the Munchon area.”

Seoul’s Joint Chiefs of Staff described the launches as a “severe provocation” and stated that the missiles “flew approximately 350 kilometres (217 miles) at an altitude of 90 kilometres.”

The missiles’ landing outside of Japan’s exclusive economic zone, according to the coast guard, was a claim made by Tokyo, which also confirmed the launches.

Toshiro Ino, senior vice minister of defence for Japan, claimed that Tokyo was looking into the missiles and that “any one of them has the potential to be a submarine-launched ballistic missile (SLBM)”.

The last time Pyongyang tested an SLBM was in May, according to Seoul, which claimed to have found indications the North was getting ready to launch one.

The launch, according to the Indo-Pacific Command of the US military, showed how “destabilising” North Korea’s missile programmes are. The command added that they were “consulting closely with our allies and partners.”

However, recent launches “may be designed to demonstrate military readiness,” according to Leif-Eric Easley, a professor at Ewha University in Seoul. Normally, North Korea conducts missile tests to acquire new capabilities.

As Pyongyang asserts, “This is not just for self-defence and deterrence,” Easley told AFP.

The Kim government is attempting to pressure Seoul, Tokyo, and Washington to sever their trilateral security collaboration.

The latest flurry of launches is a part of a record-breaking year for North Korea’s weapon tests. Last month, its leader Kim Jong Un declared his country to be an “irreversible” nuclear power, virtually putting an end to the chance of denuclearization discussions.

In response to the North’s mounting threat, Seoul, Tokyo, and Washington have increased joint military exercises, including ones involving the USS Ronald Reagan aircraft carrier and its strike group, which were recently redeployed to the region.

According to Go Myong-Hyun, a researcher at the Asan Institute for Policy Studies, North Korea was attempting to imply that the defensive joint exercises between the allies and its weapons tests, which violated sanctions, were similar in substance.

Through its ongoing missile launches, North Korea is attempting to create an analogy, he said AFP.

Analysts claim Pyongyang is more confident than ever to carry out its nuclear testing because it believes that the UN’s inaction will shield it from additional sanctions.

The Hwasong-12 rocket that Pyongyang sent over Japan last week, according to authorities and analysts, possibly travelled the greatest horizontal distance of any North Korean test.

However, at the meeting, China, North Korea’s steadfast ally and economic supporter accused the United States of “poisoning the regional security environment” by encouraging the spate of launches. Geng Shuang, deputy Chinese ambassador to the UN, made the accusation.

China and Russia vetoed the proposal in May, but US ambassador to the UN Linda Thomas-Greenfield urged for “strengthening” the sanctions already in place on North Korea.

For months, there has been disagreement within the council on how to respond to Pyongyang’s nuclear aspirations, with Russia and China taking a sympathetic stance and the rest of the council advocating for sanctions.

Soo Kim, an expert at the RAND Corporation, told AFP that it was to Kim’s advantage that alternative scenarios were taking up the time of US policymakers and involved his two main supporters, Russia and China.

Therefore, she argued, it was unlikely that Beijing or Moscow would ever support the US in its stand against North Korea.

The two nations may even have more incentive to delay assisting the US at this time if anything.

The Communist Party Congress in China is later this month, and officials in Seoul and Washington have been warning for months that Pyongyang will also perform another nuclear test.

According to US-based security analyst Ankit Panda of AFP, “a flurry of missile tests like the one we’ve witnessed could signal a build-up to a nuclear test, but predicting the time with any degree of precision is pretty tough.”

When Kim orders a test, it can be conducted nearly immediately.