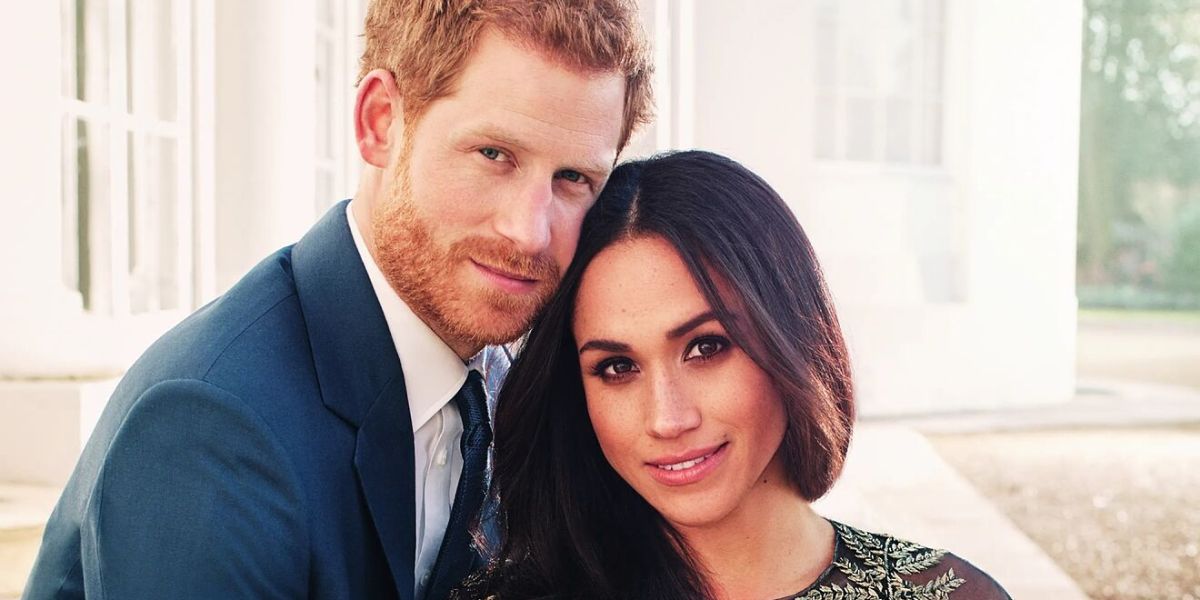 Meghan Markle and Prince Harry made a donation to Nigerian charities after the Duchess revealed on her latest Archetypes podcast that she is 43% Nigerian.

The Duchess of Sussex, 41, released the sixth episode of her audio series yesterday, explaining that she discovered she is 43% Nigerian after taking a genealogy test “a couple years ago.”

A Spotify representative confirmed in a press release accompanying the episode that the couple’s Archewell Foundation donated to Save the Children and Unicef.

The unspecified donations to charities would ‘help provide relief following devastating floods wreaking havoc in Nigeria,’ according to the spokesperson.

Floods in Nigeria, blamed by the government on heavy rain and a water release from a dam in neighbouring Cameroon, have killed over 600 people, displaced approximately 1.4 million people, and damaged or destroyed 440,000 hectares of farmland across the country.

RELATED : Backlash follows Meghan Markle’s image of herself sobbing during the funeral of the Queen 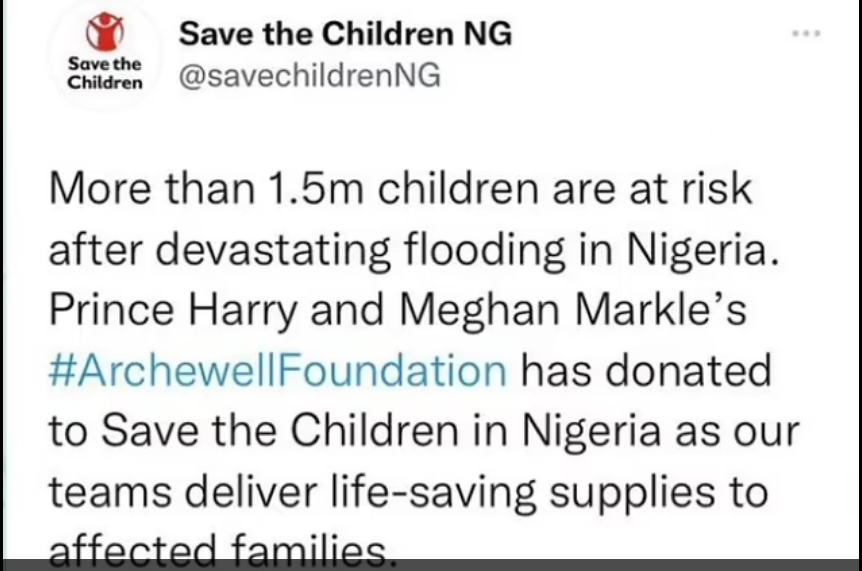 Meanwhile, Save the Children Nigeria tweeted, ‘More than 1.5 million children are at risk in Nigeria due to devastating flooding.’

‘The Archewell Foundation of Prince Harry and Meghan Markle has donated to Save the Children in Nigeria as our teams deliver life-saving supplies to affected families.’

The couple has previously supported Save The Children, with Meghan appearing in a video with their son Archie for the charity’s 2020 Save with Stories campaign.

During her discussion with comedians Issa Rae and Ziwe Fumudoh on her new podcast episode, titled ‘Upending The Angry Black Women Myth,’ the Duchess said she is ‘going to start to dig deeper into all this.’

In the episode, which was released yesterday on Spotify, Meghan admitted she is ‘particular,’ but insisted that ‘telling people what you need does not make you demanding,’ claiming that black women are stereotyped as ‘angry.’

Meghan told Nigerian-American comedian Ziwe, ‘I just had my genealogy done a couple years ago…’ ‘I am 43 percent Nigerian.’

‘I’m going to start digging deeper into all of this because anyone I’ve told, especially Nigerian women, is like “What!”‘ she added.

Meanwhile, when discussing her work behaviour, the Duchess expressed frustration at ‘cowering and tiptoeing into a room’ for fear of being perceived negatively.

‘I’m particular, I believe that a high tide raises all ships, that we’re all going to succeed, so let’s make it really great because it’s a shared success for everyone,’ she said.

‘But I also find myself cowering and tiptoeing into a room, and – the most embarrassing thing – when you’re saying a sentence and the intonation rises, as if it’s a question.

‘This is huge for our community,’ said a stunned Ziwe, 30. ‘No, seriously, you look like a Nigerian, like my Aunt Uzo.’ So this is fantastic.’

“Oh my God, stop stop, like whispering and tiptoeing around it.” Simply state your requirements. You are permitted to establish a limit. It’s okay to be direct; it doesn’t make you demanding. It doesn’t make you difficult; it clarifies you.’

The 41-year-old has previously been dubbed ‘Duchess Difficult’ after allegations of ‘dictatorial’ behaviour and 5 a.m. emails, which allegedly prompted her aide Samantha Cohen to resign.

Bullying and temper tantrums reduced other ‘broken’ royal aides to tears. Meghan has always vehemently denied any allegations of bullying.

Earlier in the episode, comedian Ziwe stated that her ‘brash and rude’ onscreen persona was ‘directly opposed to what a woman should be publicly, according to sexism.’

In a monologue in response to her comments, Meghan stated that she was’so right’ and that her point of view was ‘pretty inspiring’ when viewed through the lens of black women.

In introducing the following segment, a conversation with actress Issa Rae, Meghan stated that it was time to “try on what it feels like when we’re allowed to just live our truths”… “to be direct without being called angry, to exist on our own terms, to just be, to just be human.”

Meghan reveals that she ‘only recently started drinking coffee again’ after ‘not even thinking about it’ while in the UK after asking Rae if she wants a coffee.

‘Of course, when I was on set, it was like Nespresso all day, every day.’ And then I didn’t drink it much in the UK and forgot about it.’

The duchess later revealed another detail about her own acting career, saying that when she looked through casting lists for black characters, ‘they always had to have an edge or an attitude.’

The treatment of Judge Ketanji Brown Jackson during her Senate judiciary committee hearings was one example of alleged racism against black women discussed on the podcast.

RELATED : Meghan Markle was ‘reduced to a bimbo’ on Deal or No Deal

Jackson was questioned about her opinions on topics like critical race theory and whether they would affect her ability to make decisions. She was the first black woman to hold a position on the Supreme Court.

I recall watching these hearings in the summer of 2022, Meghan remarked. They were painful and tight-gripping. Then, Judge Jackson maintained her composure and poise regardless of what was transpiring for her on a deeper level, which I cannot even begin to imagine.

The royal paused to listen to a reading of Maya Angelou’s poem “I Rise” as the podcast came to a close.

In response to criticism for saying Deal or No Deal “reduced her to a bimbo,” Meghan released her most recent podcast.

During a conversation on her podcast with Paris Hilton, the Duchess made the remarks. In the segment, titled “Breaking Down the Bimbo,” Meghan stated that she prefers Lilibet to be valued for her intelligence over her appearance, as she was on the television game show.

“I gave up on the show in the end. I was much more than the objectification taking place on stage. I didn’t like that I had to focus only on my appearance. The Duchess described her 34-episode run on the show as having “little substance” in her remarks.

Whoopi Goldberg, an actress and talk show host, called Meghan’s comments naive. It’s TV, baby. But what did you anticipate doing? You are aware that was the focus of the show, she said. “You take the gig when you’re a performer,” they say.

The stories of the women who appeared on the show around the same time as Meghan are quite different from those of the Duchess. Instead of being oppressive or sleazy, they claim the atmosphere was enjoyable.

The successful Australian model, TV presenter, and actress Lisa Gleave, who now resides in Los Angeles, was one of the briefcase girls who assisted Meghan.

The successful Australian model, TV presenter, and actress Lisa Gleave, who now resides in Los Angeles, was one of the briefcase girls who assisted Meghan.

Like Meghan, she had to learn how to navigate the stairs while wearing a dress and five-inch heels, toting a briefcase, and adhering to the golden rule of appearing happy for the contestant when things go well and dejected when they don’t.

Gleave told the Mail that she felt “blessed and lucky to have been on” Deal Or No Deal, and she continued, “For me it was a joy and a great career move.” That’s what most of the girls would say.

I never saw it as a show that objectified women, the woman said. The cast and crew were very gracious to us. It was a well-made set. Many of us used it as a springboard for our careers and went on to bigger and better things.

Lisa acknowledged that the show “centred around beautiful women,” but added that “nobody treated us like bimbos” because they were “all smart and intelligent women.”

Comment on or share this article: Following the Archetypes revelation, Meghan and Prince Harry donate to charities in Nigeria.