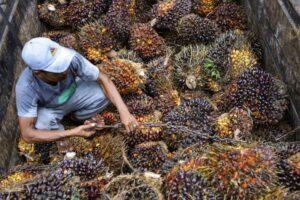 Palm oil is an edible vegetable oil derived from the mesocarp (reddish pulp) of the fruit of the oil palms. The oil is used in food manufacturing, in beauty products, and as biofuel. Palm oil accounted for about 33% of global oils produced from oil crops in 2014. Palm oils are easier to stabilize and maintain quality of flavor and consistency in processed foods so are frequently favored by food manufacturers. On average globally, humans consumed 7.7 kg (17 lb.) of palm oil per person in 2015. Demand has also increased for other uses, such as cosmetics and biofuels, creating more demand on the supply encouraging the growth of palm oil plantations in tropical countries.

The biggest producers of palm oil are Indonesia, Malaysia, Thailand and Nigeria. During the 2022 food crises instigated by the Russian invasion of Ukraine and crop failures in other parts of the world due to extreme weather caused by climate change, the Indonesian government banned exports of palm oil.

Now in 2022 great news for palm oil consumers Indonesia ended ban on export of Palm Oil for all over the world and the export will continue regularly after the huge pandemic effect. 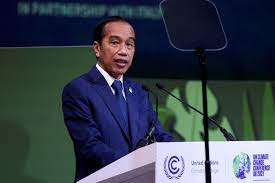 Pakistan is the third-largest importer of Indonesian palm oil. In 2021, Pakistan imported 2.78 million tonnes of palm oil from Indonesia. Two shipments of palm oil carrying 30,000 and 27,000 MT were to leave for Pakistan Tuesday while another eight shipments were expected to reach Karachi before the end of June 2022.

The Indonesian minister assured that Indonesia attached great importance to its relations with Pakistan and was ready to ensure an uninterrupted flow of Indonesian palm oil to Pakistan. He further stated that after necessary formalities, the first shipment of palm oil to Pakistan was expected to sail within 24 hours. Both the ministers discussed bilateral economic and trade relations. Minister Mahmud underscored the urgency of bridging the huge trade imbalance between the two countries. The two ministers identified SMEs, agriculture, tourism, industrial joint ventures and other non-traditional sectors as possible areas of collaboration. Minister Lutfi agreed to visit Pakistan to discuss these issues. 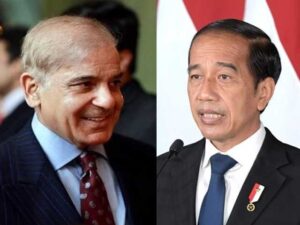 The Pakistan minister highlighted the potential of investment in Pakistan in various sectors emerging from SEZ and invited the Indonesian businessmen and entrepreneurs to invest in Pakistan.