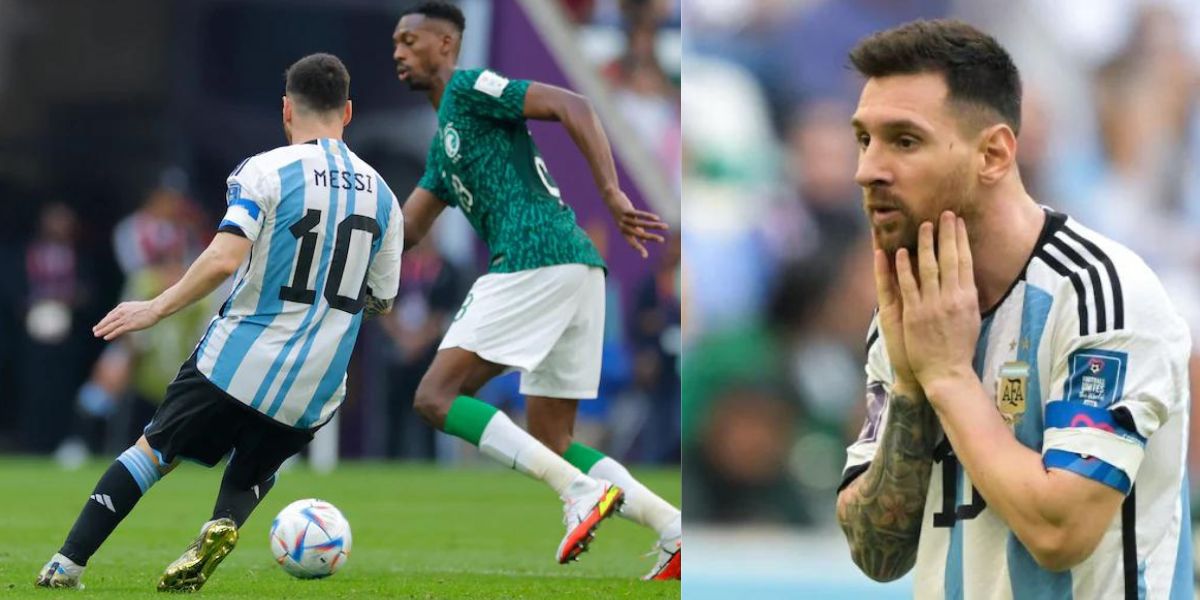 On his fifth and final attempt to win the only major trophy he has yet to win, Messi, 35, scored a penalty in the 10th minute of a dominant first half performance in which he and Lautaro Martinez also had three goals disallowed for offside.

However, Saudi Arabia, the tournament’s second-lowest-ranked team after Ghana, threw caution to the wind at the start of the second half, charging at Argentina’s defence in front of a raucous 88,012 crowd.

In the 48th minute, Saleh Al-Shehri scored with a low shot. To the surprise of even the Saudi fans, Salem Al-Dawsari curled in a scorching strike from the edge of the penalty area in the 53rd minute, leaving Argentina and Messi stunned in the Group C opener.

Despite having plenty of possession after that, Argentina was unable to break down the Green Falcons, who were competing in their sixth World Cup but had never won the opening game.

The entire game was played in an extraordinary atmosphere at the Lusail Stadium, with Argentina’s traditionally massive and raucous crowd matched by thousands of Saudis who had crossed the border to support their team.

“Our team makes our dreams come true!” and “Where has Messi gone? We defeated him! “, the green-clad Saudis chanted over and over in the Lusail Stadium, standing and roaring at every clearance, including one headed off the goal line.

Argentina needs an immediate response if Messi is to have a realistic chance of matching Diego Maradona’s immortality in his homeland by bringing home the World Cup.

It also overshadowed Messi’s achievement on Tuesday of becoming the first Argentine to score in four World Cups in his 20th appearance. Only Maradona has played more World Cup games for Argentina, with 21 in total.

“This is excruciatingly painful. “We were hoping to start the World Cup with a win,” Messi’s strike partner Martinez said. “But it happened, and now we have to train and plan ahead.”

“We lost this game because of our own errors, particularly in the second half.” There are details that matter, and we must correct our errors.”

It had all seemed so different at the start, when the marauding Messi nearly scored in the first seconds, then joyfully celebrated after sending Saudi goalkeeper Mohammed Al-Owais the wrong way with his penalty, only to have another goal disallowed.

The result buried the Saudis’ dismal history at the start of tournaments, which included a 5-0 thrashing by hosts Russia in 2018 and an 8-0 thrashing by Germany in 2002.

Their victory over the two-time World Cup champions and current South American champions was all the more impressive given the departure of their influential captain and midfielder Salman Al Faraj shortly after halftime with a hamstring injury.

Coach Herve Renard, according to midfielder Abdulelah Al-Malki, has the Saudis fired up like never before.

“Renard made us cry with the motivation before the game and pumped us up during halftime,” he said, calling the Frenchman “crazy.”

Argentina’s most recent defeat came in the Copa America semi-finals in July 2019 at the hands of Brazil. FIFA, the world football’s governing body, has them ranked third, 48 places ahead of Saudi Arabia.

Argentina’s last defeat in a World Cup opener came against Cameroon in 1990. They still made it to the final, which could be a good omen for Messi and his teammates.

The Saudis couldn’t stop themselves from crying and praying on the floor before running to celebrate with their fans, while the Argentinians trudged off downcast, their supporters shaking their heads in silence.